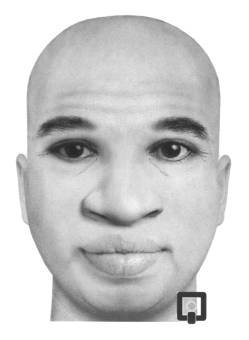 Case # 06002247
On August 15, 2006, at 10 p.m., an individual was robbed at gunpoint. The female victim had just left a store in Dickinson and was walking to her car in the parking lot. The actor came up behind her and put a black gun to her head. He demanded and received money and fled on foot.

The actor is described as a male, black, and in his late 30s. He has a very dark complexion with big brown eyes. He is between 6' and 6'2" tall and weighs about 295 lbs. The victim said he had bags under his eyes and crow feet wrinkles at the corners of his eyes. A composite of the actor is attached.