Create an Account - Increase your productivity, customize your experience, and engage in information you care about.

The Dickinson Historic Railroad Center is owned by the City of Dickinson, Texas. It is comprised of the Dickinson Railroad Depot, the League City Railroad Depot, and the grounds surrounding those depots. It includes any artifacts, objects, displays, benches, or other physical devices or equipment associated with the grounds.
Early Beginnings The Dickinson Depot sat along the railroad tracks not far from Highway 3 and FM 517 East. The Dickinson Depot was part of the Galveston, Houston, and Henderson (G, H and H) Railroad Line, which was one of the earliest railroads in Texas. Chartered in 1853, the G, H&H was one of the oldest lines in Texas to retain its original charter name and the first railroad to reach the Texas Gulf Coast. The line gained financial stability in 1882 under the ownership and empire of Jay Gould. 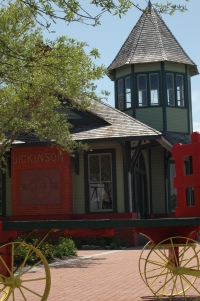 The original Dickinson depot was built in 1859 and later burned in 1900. A new depot was designed and built in 1902 by architect George B. Stowe, a prominent Galveston architect. More elaborate than the other depots along the line, Stowe’s design called for a red brick mantle fireplace, double half-moon doors, and a bay window overlooking the tracks.  Becoming the Town of Dickinson Through the doors of this beautiful Victorian-styled structure traveled thousands of visitors to the Dickinson, Galveston, and Houston area. Many of the visitors spent their days at the picnic grounds, racetrack, and various Dickinson events. It is no wonder that this depot helped to name the Town of Dickinson. Situated on property of once owned by John Dickinson, one of Stephen F. Austin’s original “Old 300” settlers, the station came to be known as the Dickinson Station. Many of the travelers came to know and enjoy the area as Dickinson, even though several other names were tried in identifying the region.  Garden Club Restores the Depots For these many reasons, the Weed N Wish Garden Club members came to love and later own the Dickinson Depot. They could not allow the little depot, which had been so significant in developing our city, to be destroyed. They took it upon themselves to restore, renovate, and maintain the Dickinson Station as an area community center and museum.  At a time when no city government existed, the garden club ladies raised the money necessary to move and restore the Dickinson Depot. Only a short time into the fundraising and restoration work, the garden club members were offered the League City Depot. Knowing its importance to the area as well as the state, the ladies decided to add to their fundraising burden and save the League City Depot as well.  Depots Donated to the City For many years these ladies provided a fabulous community center and museum to visitors and residents, but the expense and hardship of maintaining the buildings became too much for the garden club. The depots were donated to the City of Dickinson.  Dickinson Historical Society Understanding the significance of the 2 depots to our state and town, the City of Dickinson help establish the Dickinson Historical Society. The society took on the task fundraising and restoring the depots, with the assistance of the city, the Dickinson Economic Development Corporation, TXDOT, Texas Historical Commission, and many other supporters.  Present-Day Dickinson Historic Railroad Center Today the depot area consists of the following:
[]